Nightlife in Coimbra is lively and varied, with club and bar owners kept on their toes by a demanding student population. Cosy restaurants for a romantic meal a deux; intellectuals’ cafés; lively cocktail bars; gastro breweries; jazz and Fado venues; classical music recitals; stage performances; and cinema screenings—whatever you are looking for from nightlife in Coimbra, it is unlikely you rest disappointed.

Café Santa Cruz offers an outdoor seating area, which is a must in good weather, providing views across the square and the Santa Cruz Church. Bar Quebra Costas is located between the medieval old town and the newer downtown area. The bar has a pleasant terrace area overlooking the street and a quirkily decorated interior. Established in 1984, it has become a firm favourite on the Coimbra nightlife scene. If beer drinking is your thing, head to Praxis to taste the delights of Coimbra’s leading independent brewery. Praxis began brewing in 2001 and expanded into a gastro-brewery in 2009, with the opening of its bar and restaurant.

For music lovers, there are many options for enjoying the nightlife in Coimbra. A Capella is another bar and café that was established in a former church — in this case, a chapel that was constructed back in 1364. These days, A Capella specialises in Fado and stages performances nightly with some of the city’s most famous Fado musicians. The acoustics need to be heard to be believed.

Partying is popular in Portugal and, thanks to the student population, most of the clubs in Coimbra are open five nights a week, sometimes even seven. What’s in and what’s out changes with the seasons and from year to year, but there are several that usually make the grade, such as Passerelle or Feito Conceito. Passerelle is open nightly and tends to get busy after 10.30pm, staying open well into the early hours and, at the weekends, dawn.

Feito Conceito is a hidden gem for music lovers, with regular DJ sets playing their latest mixes. The entrance is via the Tabacaria Pavao downstairs, which opens up into a main bar area with a number of back rooms with high ceilings and funky décor. For great drinks and cocktails at low prices, this is a popular choice.

If you would prefer your nightlife in Coimbra to be a little more sedate, why not head to a performance at the university theatre before decamping to the attractive upstairs lobby bar for a drink or two before heading home.

This offbeat house holds one of Coimbra's most enticing bars, a quirky space with extremely original decor and a relaxed, inclusive vibe. Music ranges from jazz to alternative rock and there's always something interesting going on or in the pipeline. Gay friendly, too. 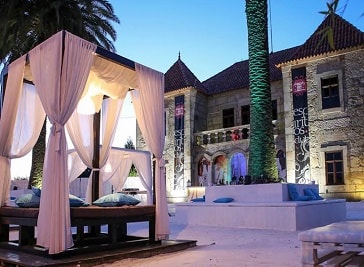 Located in an equally rich historical and tourist area, this house became a reference throughout the region. Inaugurated in 2001, this club after undergoing some remodelaes and change of management is assumed at the moment as one of the best clubs at national level. With exquisite decoration and personalized service, here you will find the ideal solution for a night of pure fun.